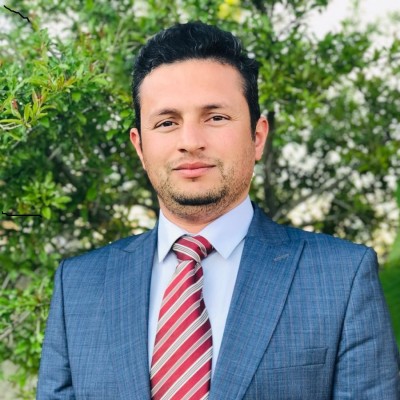 According to general committee of Scientific title at Duhok Polytechnic University on 16 of February in 2020 number 5 the committee decided to change the title from assistant lecturer to Lecturer and the decision is will be available from 22/11/2019.

I have given lectures on Financial markets for the second class of banking management for the evening and morning students in 2018-2019 and currently giving lectures on Management Of Banks for second year students for year of 2019-2020.

Doing lectures on International and National accounting for the forth class of Accounting department.

Studying MSc. banking and finance at university of Leicester at UK.

Working as accountant at college of Agricultural and forestry at university of Duhok.

Member in Scientific committee for the department

Scientific committee for the department

The study examined the nexus between the financial ratio and book value of shares for Iraqi money transfer companies. The data used was extracted from the financial reports of selected money transfer companies listed on the Iraq Stock Exchange, and a descriptive, correlation and panel least square regression technique were adopted for the analysis. The result revealed that the financial ratio captured by earnings per share (EPS), return on investment (ROI) and return on assets (ROA) were positively related with the book value of shares (BVAL), while debt ratio (DER) was negatively related with BVAL. Also, EPS, ROA, ROI and DER positively influenced BVAL. Thus, the en-gagement of competent and qualified personnel to manage the assets and investments in order to ensure optimal returns is urgently required. There is also a need for proper issuing of shares by the management of money transfer companies to ensure free ac-cess to the stock market.

Construction Industry Performance and the Growth of South African Economy Any Causal Relationship?

The Construction industry is a vital sector of any nation, contributing immensely to economic growth. This study examines the causal relationship between the performance of construction industries and the Gross Domestic Product in South Africa for the period 1995-2018. The Secondary data sourced from Bloomberg, McGregor's database and the World Bank's database were analysed using Augmented Dickey-Fuller (ADF) and Phillips-Perron (PP), Dickey-Fuller general least squares (DF-GLS) unit root tests and the Ng-Perron test techniques for unit root test, co-integration and granger causality. The results revealed that the variables were found to be stationary as indicated by the three tests thus, the establishment of a short-run equilibrium relationship for the variables. Moreover, it was established that there exists a bi-directional relationship between Gross Domestic Product and Construction industry performance in South Africa. Therefore, the need for more investment in infrastructure by the government was recommended as the viability of construction industries would create employment opportunities that allow for the development of other sectors of the economy through the multiplier effect and such. The activities and operations of construction industries should be made easier through the provision of favourable business settings.

This study examines the validity of Altman’s Z-score model to predict corporate failure in the case of 10 Iraqi private companies between 2007 and 2016, using the Generalised Method of Moments system. The results show that the lagged Z-score has an insignificant negative effect on the contemporaneous firm Z-score. However, working capital to total assets (X1), retained earnings to total assets (X2), profit before interest and tax to total assets (X3), book value of equity to total liabilities (X4) and sales to total assets (X5) have a positive effect on a firm’s Z-score. X1 and X4 are significant at 1%, X3 and X5 are significant at 5% and X2 is insignificant in determining the corporate failure in Iraqi private companies. This study therefore suggests, among many other recommendations, that Iraqi firms should apply financial analysis models to evaluate the results of their work in the event of corporate failure. The results of this research clearly show that this is likely to be important for these companies and for their shareholders and other individuals, such as investors.

This paper attempts to find out why higher institution students in Duhok are not opening or having bank accounts. With the use of interview process and questionnaire, 100 students were selected from Newroz University, Dohok Polytechnic University and Dohok private technical institute in Duhok city. It was found from this study that most of these students’ approximately 90 students of them have no bank accounts while only 10 of them have bank accounts. Moreover, this research found that trust on banks, security, bad banks infrastructure, lack of money, costs of opening bank accounts, access to bank accounts and unemployment are the main reasons for low banking interest among students in Duhok city. However, the highest reason is lack of trust on Duhok banks and lack of money due to high unemployment rate. It is suggested that banks in Duhok city should encourage students to open bank accounts by advertising the importance of banking services and offer student loans. Also, Duhok government should award scholarship to student to ease the pressure from the unemployment menace in the country. Keywords: Un-bank, Bank trust, Poverty, Banking access

Abstract Purpose: This study studies the effect of capital structure on the performance of some Iraqi private banks. Six banks based in Iraq namely: Babylon bank, Investment bank, Credit bank, Commercial bank, Sharq Al-Awsat bank, and Baghdad bank were selected for the present study over the period 2005 to 2015. Methodology: Annual reports of these banks were studied and relevant ratios were calculated. The variables that were identified as independent for capital structure were total debt to capital, bank size and asset growth, while return on assets and return on equity were considered to be dependent variables for bank performance. The panel Least Square model has been used to examine the impact of capital structure on bank performance. Findings: Outcomes indicate that none of the independent variables has a significant impact on return on assets (ROA), while total debt to capital (TDC) has a positive impact on return on equity (ROE). Originality: Depending on this result, Iraqi banks should keep sufficient amount of capital to avoid any financial risks and increase the probability of survival.

This paper observes the impact of working capital management on profitability of industrial sector in Iraq. Four companies based in Iraq namely: Iraqi Date processing, Iraqi carton manufactories, Baghdad soft drinks and Iraqi for tufted carpets randomly selected and analyzed for the present study over the period 2007 to 2016. Annual reports of these companies have been studied and significant ratios calculated. The variables that were identified as independent for working capital were, current ratio and quick ratio, while return on equity ROE as dependent variable for profitability. The Ordinary Least Square (OLS) model used to examine the impact of working capital management on profitability. Results indicate that ROE is positively related with working capital variables.

The Impacts of Liquidity on Profitability in Banking Sectors of Iraq: A Case of Iraqi Commercial Banks

This study examines the influence of liquidity on the profitability of Iraqi commercial banks. Five banks based in Iraq namely: North bank, Iraqi Islamic bank, Sumer bank, Dar Es-Salam bank and Babylon bank randomly selected and analyzed for the current study over the period 2005 to 2013. Moreover, annual reports of these banks have studied and the main ratios of profitability and liquidity were calculated. These reports are available at Iraqi Stock Exchange site. The variables that were identified as independent for liquidity were, loan deposit ratio, deposit asset ratio and cash deposit ratio, while return on assets as dependent variable for profitability. The Ordinary Least Square (OLS) model used to examine the impact of liquidity on profitability. The study observes that any increase in liquidity ratios as above mentioned will lead return on asset to increase as well. Depending on this study it could be better for Iraqi banks to keep a balance between liquidity and profitability. Key Words: Return on Asset (ROA), profitability, liquidity

a short course on E-learning as part of the pedagogical training in Duhok City Center. (Mrs. Hanan Abdulrahman)- an assistant lecturer at the DPU and pedagogy trainer at the Duhok Pedagogy training center have taught this course. Moreover, the course have run for three days (between 20th and 24th of October, 2019)-which counts 9 hours in total.

Higher Institution Students and the Un-banked Rate in Duhok City, Iraq? Evidence from a Survey Analysis.

Providing loans and obtaining interest rates on loans by banks

Unemployment is the reason of painful.

How is important to build a house in an economic ways.

This course introduced Islamic finance and banking and taught me about the growth and potential for Islamic finance. looked me into the five core aims of Sharia law and learn that the Sharia law prohibits unethical, immoral, and speculative activities. I learnt the aspects of Islamic law and contracts such as types of transactions, ownership categories, and common elements of a contract. Score 88% Study Time 3:44:43

This 6-hour free course looked at the processes used and the markets available across the world for raising equity finance.

This 7-hour course looked at liquidity management, a fundamental aspect of risk management that has come under scrutiny in the past few years.

Getting started with SPSS

This 3-hour free course explored how to handle statistics and statistical software packages in psychological research.

Personal and Family Financial Planning will address many critical personal financial management topics in order to help you learn prudent habits both while in school and throughout your lifetime by University of Florida. For 9 weeks.

Finance for Every one: Debt

In Debt, we take on one of the most challenging financial questions that remains unresolved: How much to borrow? We start by demonstrating why using debt has always been and continues to be a great temptation, particularly when borrowing costs are historically low. We identify conditions for selecting the optimal amount of debt for a corporation looking to maximize its value. You’ll become fluent in related concepts like norms and benchmarks. You will explore these and other factors that influence debt for individuals and for public sector organizations -including governments, who are the largest consumers of debt. Like pollution, debt creates systemic risks even for the people and organizations that don’t create it. This course discusses the imperative of limiting and reducing debt and the costs to all of us if we don’t. We build on case based learning giving you opportunities to interpret, uncover and acquire financial information that is often hidden or missing. We also summarize important threads from previous courses to give you a deep and cohesive understanding of when debt works for you and when it becomes your worst enemy. For four weeks.

Taken 120 hours in order to know they methods of learning subjects to students.